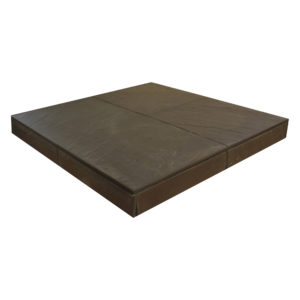 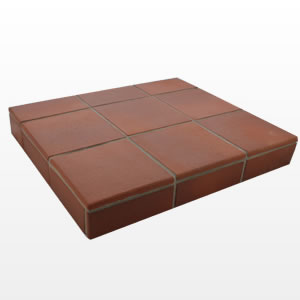 A Great Range of Fire Place Tiles and Hearth Tiles

Before the 1600’s, (before the Health and Safety Executive was even an idea) most houses that were built incorporated an open hearth right in the centre of main living room.  Often logs were burnt by resting them on a bar between two cast iron “fire dogs”. It was only with the arrival of canopies which were used to draw the smoke away that these centrally located open hearths were moved out to the room walls where these canopies were easier to support.

In medieval kitchens, fire places were constructed to be very wide in order to accommodate cooking spits and huge logs. The opening of the fire was usually spanned by either an oak beam or a Fireplace Mantel and there was frequently room to sit by the fire, the “ingle-nook“.

The Ingle-nook itself has an interesting history – it began as a partially enclosed hearth area, appended to a larger room. The hearth was usually used for cooking, and its enclosing alcove, or “ingle-nook” (from ingle, meaning “fireplace” in Old English and from Old Scots or Irish aingeal, “angel” or “fire”, and nook). This enclosed area became a natural warm corner for family members seeking a little extra warmth to gather. With changes in building design over the years, kitchens eventually became separate rooms. Despite this, inglenooks were retained in the living space as intimate warming places within larger rooms living rooms.

Inglenooks were popular and important features the Arts and Crafts architecture of the late 19th Century. Despite their popularity, they began to disappear along with the advent of central heating.

The 1700s saw the arrival of enclosed wall Fireplaces complete with the chimney stack which contained a flue running upwards from the hearth. The majority of hearth openings were rectangular in shape and were topped by a stone or wood lintel. The Fireplace was treated as essentially being a part of the wall but they gradually evolved into becoming a prominent feature of most rooms, perhaps because the eye would naturally be reason to the flames. This in turn fuelled the interest in and demand for the fire surround or the fireplace mantelpiece.

The fire surround itself was an Italian invention from the Renaissance, which in turn drew its inspiration from the classical architecture of the Greeks and Romans. The fire surround was essentially a pair of legs either side of the hearth which were linked by an entablature. The legs were often ornate and took the form of various columns, carved figures or architectural mouldings. The “entablature” was again an ornate affair and often incorporated a highly decorative frieze.

Historic Changes and their Results

Changes in England began to occur with the advent of the great era of shipbuilding which led to the disappearance of much of England’s woodland. This change led to a change in the fuel of choice and widespread coal burning began along with the introduction of the now familiar coal burning fire baskets to peoples living rooms.

The first fire baskets used for burning coal took were structured to incorporate a small fireback with bars all around. Over time these simple coal burning fire baskets evolved into the heavy “dog grate” which was raised up above the hearth. Another variant on the small fire basket was the “hob grate”. This period structure incorporated shelves on either side of the fire and it was the first grate to be permanently built in. In addition, to prevent cinders from falling on the floor, fenders were introduced.

Over the years there have been a good number of technical and decorative changes made to the once humble Fireplace, for example, the familiar sloped angles of the sides of the hearth were introduced to better reflect heat into the room along with the progressive reduction in the size of the hearth and flue to increase the draw of air. These technical changes in the way Fireplaces functioned were followed by new design ideas and opportunities.

Pushing back from the often gaudy excesses of Jacobean decoration, fashion favoured a return to the classical style. In time, 17th century Classicism was followed by Baroque and then Rococo style before returning once more to Neo-Classicism with the instigation of the Adams brothers. Their marble Fireplaces set a style, which continues to this day.

The “Style of the Adam Brothers”

The Adam style (otherwise known as Adamesque and “Style of the Adam Brothers“) was an influential 18th-century neoclassical style of interior design and architecture. It is named after a design style practised by the three Scottish brothers; Robert Adam (1728–1792), James Adam (1732–1794) and William Adam. Of the three, it was Robert and James who were to become the most well known.

The Adam brothers advocated an integrated style for architecture and interiors. Their design vision was to promote the idea that walls, ceilings, fireplaces, furniture, fixtures, fittings and carpets should all be designed as a single uniform scheme. The Adam style found its heyday from the late 1760s in upper-class and middle-class residences in 18th-century England, Scotland and Russia. As an idea, the integrated design concepts of the Adams Brothers continues to have a strong influence even today.

The Road to the Tiled Fireplace

Over time, the areas between the legs and the hearth or grate came to be lined with marble, slate or ceramic fire place tiles. Sometimes ornate picture panels were incorporated in these five tile panel sets. The full “Over Fireplace Mantel” was done away with and pictures or mirrors began to be  hung on the chimney breast. This style continues, with variations right up to the present day.

The Victorian period saw a number of shifts in interior design style. What would come to be recognised as the a typically “Victorian” style was actually the natural evolution of ideas that began back in the Regency period. This progressively developed towards what later came to be seen as excessive embellishment, culminating in the ornate, almost heavily decorated look that many associate with the term “Victorian”. Along with these changing design trends, Victorian England experienced and explosion of consumerism and mass production as the Industrial Revolution swept the nation. With industrialisation, wealth also grew rapidly, and with it the desire to display the fruits of that wealth. Fireplaces had been made from cast iron but during this period, the decoration of those fireplaces with fire place tiles became very prevalent. Fire Place Mantel-shelves were also built wider to accommodate objects of beauty such as clocks, candles and various ornaments.

The “High Victorian Gothic Style” was an echo back to the high style of the earlier Medieval Gothic Style. It developed partly from a romanticised resurgence of interest in all things connecting back the Middle Ages.

All fashion trends are reactionary and it was not long before the arrival of the “Aesthetic movement” of the 1870s and 1880s which rejected what it interpreted as unnecessary ornamentation, instead relying on the use of simple designs with little “unnecessary” ornamentation. In a further reaction, the 1890s the Aesthetic movement gave way to the Arts and Crafts movement. A variety of fire place tiles characterised this very active design era. As many of the properties built during this golden age still remain, sympathetic restoration projects on properties that were built in the late 19th and early 20th century often include the restoration of period featured, including those classic tiled fireplaces. 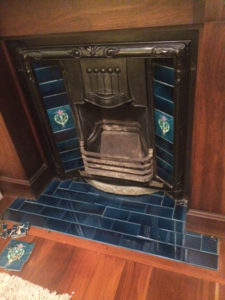 A Classic Tiled Fire Place that we helped a customer restore to it’s former glory!